The future of Corona (Covid19)

Almost two months ago, even before the first Coronavirus carrier in Israel died, Benjamin Netanyahu ordered to make use of surveillance and monitoring tools that were reserved for tracking terrorists in the past. Now, they were to be used against Israeli citizens.

This way, as soon as a person is diagnosed as a coronavirus carrier, the Shin Bet can retroactively track his movements, and identify every other person with which the carrier has interacted in the weeks before they were tested. Those people then receive a text message, telling them to stay home in self quarantine.

Israel is also using aerial drones. Not just as a way for police officers to warn the public to stay home, but also in order to ascertain whether people who were supposed to be in self quarantine are actually home. The drones are being sent from the ground floor, and the officers can actually peek in through the windows of the house.

As you can imagine, the use of these surveillance tools has caused much concern among human rights organizations, and for a very good cause. I think both Democrats and Republicans will agree that giving the government too much power over the citizens – and knowledge means power – can easily lead to tyranny and to loss of power and influence that the common citizen should have over his or her elected officials. And yet, it is also clear that automated contact tracing can help protect the population from the virus’ spread.

We see this tradeoff between privacy and public safety all over the world, especially now. Surveillance is being normalized in many countries around the world, as a way to deal with COVID-19 spread while also giving power to the government. In Cambodia, the prime minister Hun Sen has passed an emergency bill that allows the government to listen to all phone calls… and also lets Sen pass any new law he wants. And this bill won’t just expire when the virus – eventually – goes away.

Similarly, Russia is starting to make use of a holistic surveillance system, that should obtain data from “location monitoring apps, CCTV cameras equipped with face identification algorithms, QR codes, data from smartphones and credit card information.” The opposition has already announced that these measures allow Putin to form a “Cyber Gulag” – an eternal prison, in which everyone is being watched all the time. And guess what – that system isn’t going to go out of use either, once the current crisis is over.

Cambodia and Russia are hardly liberal democracies, but they are far from being the only ones to monitor their citizens in the rise of the coronavirus. South Korea is tracking people’s phones as well, as does Taiwan, Austria, Belgium, Italy and other countries. This means that, for the first time in history, we accept mass surveillance as a proper and acceptable development. The coronavirus has ushered our entry into the era of total exposure, and the lack of privacy.

In the short term – the next ten years or so – this development will benefit us greatly. We’ll be better protected from not only infectious viruses, but also from criminals. As we are constantly monitored, automated healthcare services could be provided to us for a near-zero cost. But in the long term, this lack of privacy has the potential to spell the end of liberal democracy. When governments can spy after every person, understand when people are going to demonstrate or even to call for rebellions, and influence every individual with carefully-tailored ads – democracy may remain in existence in name only, but the true freedom of choice will have been wrested away from the public, and placed firmly in the ruling regime’s hands.

To stop that from happening, it is our responsibility as citizens to demand total transparency about the ways in which we are being monitored, and about the way the data collected about us is being used. Watchdog organizations will need to be especially active in this decade, and the governments themselves need to form committees and agencies that will make sure that surveillance measures obey ethical and legal boundaries.

The second issue I want to address is the national seclusion. Israel has been one of the first nations to close its borders to China and several other countries in which the coronavirus has been spreading uninhibited. As a result, the disease has only dealt Israel a glancing blow, with around 12,000 people infected, and only 130 dead. Compare that to Belgium’s 5,998 deaths, despite the fact that Belgium and Israel have nearly the same number of citizens, and you’ll see what I mean. Belgium only closed its borders mid-March, and the results are self-evident.

We are now going into a period in time in which the number of infections of COVID-19 is going down across most countries in the developed world. Eventually, many countries will reach the state in which China is right now, with no infections stemming from the nation’s residents – but only from citizens who come back from abroad, carrying the virus with them. Nations won’t take that risk lightly, especially if a second wave will come – as some expect – by fall this year. Expect borders to remain closed until there’s finally an efficacious vaccine against the virus.

That said, not all countries will shut their gates. Some will maintain a more welcoming policy to outsiders – especially countries whose economies rely on tourism and hospitality. But do you really want to go on a weekend shopping spree in Spain or Italy – in a few months from now, of course – when you know that you’ll need to get tested before boarding the plane and after landing, and may even find yourself staying in quarantine for a day or two, just to be on the safe side? Expect the tourism and hospitality industry to suffer.

This raises another point: some sectors of the industry are going to suffer greatly. The five industries most vulnerable to the crisis are mining, transportation, employment services, travel arrangements and luxury & hospitality. Together, these industries employ more than 24 million American workers, or 16.5 percent of the entire workforce.

Forecasts are spread all over the spectrum. Goldman Sachs forecast an unemployment rate of ‘only’ 15 percent. Economists in the Federal Reserve Bank of St. Louis believe it could be as high as 32.1 percent. The most vulnerable workers in the States are those who are young, employed part time, and only have a high school diploma as an educational attainment.

My belief, therefore, which is backed by several of the top consulting and accounting firms, is that we will experience a global recession that will last at the very least till the end of this year, and could at worst be extended into the next three to five years. If that ends up being the case, then we must be prepared with solutions for all who will suffer because of this crisis, and especially for vulnerable populations – low-income, low-education populations – that will bear the brunt of the blow.

Finally, this crisis will have an unexpected effect on the labor market: it will accelerate the displacement of workers by machines and Artificial Intelligence – AI. Nir Jaimovich and Siu’s research from 2012 shows that in the last three large recessions, 88% of the jobs that were lost were essentially automated, with the workers displaced by machines. The recession caused by COVID-19 is thus likely to have a similar effect and stands to accelerate the pace of workers displacement and job automation. State governments need to be prepared for that development with rapid reskilling and job placement programs, and by investing in their workforce development boards and expending their capacity to handle large numbers of unemployed citizens.

I want to conclude with a point of light. Ten days ago, the impossible happened. The Palestine branch of the UN office for the Coordination of Humanitarian Affairs praised Israel. I kid you not. It praised, and I quote – the “unprecedented cooperation on efforts aimed at containing the epidemic” between the relevant Israeli and Palestinian authorities. Suddenly, Israel and the Palestinian territories find themselves united for practically the first time… ever. And it’s not very surprising, as for the first time they have a common enemy. One that does not distinguish between Jews and Muslims, Christians and Buddhists. It kills everyone.

And so, Israel has approved for Palestinian day workers to stay overnight, and arranges housing solutions for them. It has initiated medical training for the Palestinian Authority governing agencies, and has transferred more than $30 million USD to help it fight the coronavirus. It has delivered more than 1,000 units of corona testing kits to Palestinian hospitals. And the Mossad – the notorious CIA of Israel – has even received explicit orders to purchase ventilators for both Israel and the Palestinian Authority.

Now, obviously, Israel has a vested interest in ensuring that its close neighbor remains as healthy as ever, especially when the borders between the two are as porous as they are today. But this interaction between the two governing entities reflects a larger truth, that can be applied to all nations on the face of the Earth: we stand – and fall – together.

I like comparing the current situation to an alien invasion. If the aliens were to land tomorrow morning and started killing everyone on sight, do you think we would continue to fight against each other? I’d like to think that we would band together instead against the larger, more immediate, threat. We won’t necessarily like each other any better than before, but we will unite. Just as the Greek city-states united against the invasion of the Persians, some 25 hundred years ago, so will we.

There are already signs of this willingness to stand together against our common enemy. It’s not just Israel and the Palestinian Authority. There’s a belief that the United Arab Emirates has also donated coronavirus test kits to Israel, and while some nations like Russia, China, and one other superpower are playing the blame game, scientists all over the world are intensely collaborating to fight the virus. Citizen scientists – engineers and innovators – are taking part in hackathons and contests to come up with better solutions and tools to fight the virus. And whatever outcomes they have, are being released with no IP all over the globe. At least two large hacker groups declared they won’t attack hospitals for as long as the virus is still out there. We’re fighting the virus, together, and we will win, together.

Hopefully, our children will grow up in a more unified, more collaborative world, because of the coronavirus. We will win this fight, and we will emerge from it with better medical science, better healthcare services, and – hopefully – better international relations. We just need to keep reminding our leaders that this is the time not to show national responsibility, but an international and an extra-national one. A global responsibility and a global leadership, for the present generation and all the generations that will follow.

Good luck to all of us, and keep safe. 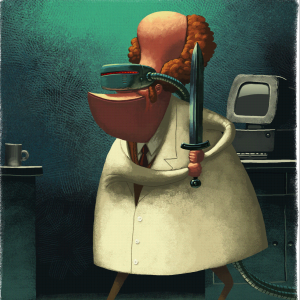 PrevPreviousTest yourself – Do you know mammals?
Next10 Easy-to-follow Science Education YouTubers​Next
June 22, 2020

The future of Corona (Covid19)