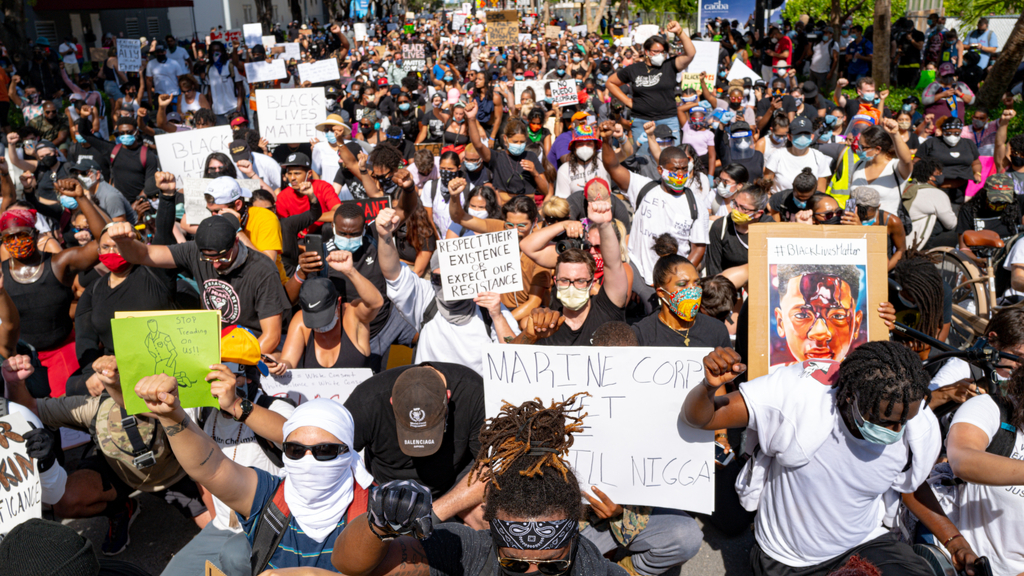 Experts expected the widespread “Black Lives Matter” protests to spark new chains of COVID-19 infection. But a new analysis shows that the cities with the largest protests have not had spikes in transmission. That may be because people who did not attend protests increased their social distancing during those weeks, BuzzFeed News reported.

That said, the available data may not capture the true number of infected protesters, and large crowds do present significant risks for viral spread, BuzzFeed noted.

Protests against systemic racism and police brutality began more than three weeks ago in the U.S., prompted by the killing of George Floyd, and continue to draw droves of participants across the country. While wearing a mask can reduce risk of COVID-19 infection, infectious disease experts and epidemiologists have cautioned that the risk cannot be completely eliminated.

Related: 13 significant protests that changed the course of history

“[Protesting is] really the worst thing they can do from the pandemic standpoint, because people are coming from disparate areas, crowding together, screaming,” which can transmit the virus more easily, Dr. John Swartzberg, a clinical professor emeritus in infectious diseases and vaccinology at the University of California at Berkeley School of Public Health, told Live Science in early June.

Now, nearly a month into the protests, one study based on cell phone-tracking data suggests that, overall, social distancing actually increased in major cities as the protests unfolded, BuzzFeed reported.

“You need to understand what’s going on with all different parts of the population … Many of these cities have populations in the millions,” study author Andrew Friedson, a health economist at the University of Colorado, Denver (UCD), told BuzzFeed News. As protests persisted in major cities, large portions of the population stayed home — especially in areas where protests were “accompanied by media reports of violence,” the authors noted.

The study, released by the company Safegraph and conducted by researchers at UCD, San Diego State University and Bentley University in Massachusetts, also suggested that mandatory curfews could not completely explain the increase in social distancing. Rather, people may have been motivated to stay home voluntarily, presumably to avoid any conflict brewing outside, the authors noted.

Hypothetically, if a significant number of protesters did become infected at a rally or march, increased social distancing within the wider population could buffer the effects of the outbreak, BuzzFeed reported.

That said, we don’t know exactly how many protesters have contracted COVID-19 after attending an event. Several small surveys, conducted in Boston, Seattle and Minneapolis, noted that very few people who told public health officials they attended protests tested positive for the virus, BuzzFeed reported. (Minneapolis set up new testing sites in areas heavily affected by the protests, Wired reported, while all three cities widened their criteria for who should be prioritized for a test to include those who recently attended a protest.)

The fact that protests took place outside, where viral particles can disperse more easily than indoors, and many protesters wore masks may factor into the low number of new cases, Andrew Noymer, an epidemiologist at the University of California, Irvine, told BuzzFeed News. However, it’s also possible that cases are being overlooked; given the number of young people attending protests, a significant portion of protesters may not develop severe symptoms, even if infected, and never receive diagnostic testing as a result, he added.

“The fact is that we will just never know for sure, because there’s too many moving parts,” Noymer said.

“There still could be a superspreader event from protests we haven’t seen yet, given other cases,” Gerardo Chowell, an epidemiologist at Georgia State University in Atlanta, told BuzzFeed News. Throughout the pandemic, large clusters of COVID-19 cases have emerged during so-called superspreader events, where one infected individual sickens many others. Most of these events took place indoors, but large outdoor gatherings could present a similar risk, Chowell noted.

As the U.S. entered its fourth week of protests, many states did begin experiencing surges in COVID-19 cases, but “most of the timing for these spikes, like in Arizona, fits the timeline of relaxation of restrictions and reduction in social-distancing efforts,” Saskia Popescu, an epidemiologist at George Mason University in Fairfax, Virginia, and a member of the Federation of American Scientists’ Coronavirus Task Force, told BuzzFeed News in an email. As states eased their stay-at-home orders, some as early as the end of April, COVID-19 cases increased in turn.

In light of the surges, experts told Live Science that some of these states, or at least the hard-hit cities and counties, may need to consider instituting strict lockdowns once more, especially as ICU beds fill and medical supplies run short.