NASA and SpaceX’s most defining moment of our current space era is coming up at the end of this month, with its Demo-2 mission on May 27. The mission will be the first-ever launch for SpaceX with humans on board, and for NASA, it’ll mark the first return to U.S.-based astronaut launches since the Shuttle program flew its last flight in 2011. On Friday, representatives from both SpaceX and NASA briefed the media on the mission and the specifics of what it will involve when astronauts Bob Behnken and Doug Hurley board the Crew Dragon for its debut crewed performance.

The first thing to note about this mission is that it’s still technically a test, as noted in the “demo” name. This is the capstone demonstration in a series of such missions that will fully human-rate the SpaceX Crew Dragon and Falcon 9 for operational use. As noted during today’s press briefings, a big chunk of the actual human rating process occurs during this final mission — in fact, the majority of the actual final human rating happens on this flight, despite the many years of preparation and live tests to date, including the Demo-1 mission, which was essentially a full round-trip flight, just without any astronauts on board.

Even though it’s technically a demonstration, the stakes couldn’t be higher — SpaceX has a lot to prove here, and it bears the utmost responsibility in terms of keeping Behnken and Hurley safe for the duration of the mission. Which, it turns out, is actually going to be longer than originally planned: NASA says the mission will last anywhere between 30 days and 119 days, depending on a few different factors, the most significant of which being how quickly the agency ends up being able to launch the first operational Commercial Crew mission, Crew-1, which will carry four astronauts, including two from NASA and one from Japan’s space agency. The Crew Dragon used on this Demo mission could technically remain on orbit for over 200 days, but the purpose of this mission was not originally intended to be staffing the International Space Station, though that’s now part of the plan as a sort of stretch goal.

The teams also revealed today that the Crew Dragon used for Demo-1 will carry not only the astronauts, but also some cargo for the ISS. SpaceX also flies dedicated ISS resupply missions using its non-crew Dragon capsule, but this Crew Dragon will bring just a few additional supplies and scientific material along for the ride.

In terms of timeline, the mission begins with a launch and ascent, followed by the second-stage separation (with Crew Dragon attached). The first-stage booster performs a flip and “boostback burn,” which sets it on its path to return to Earth for a powered landing. Meanwhile Dragon separates from the second stage in space, and heads on to the ISS, which it’ll reach in anywhere from between two and 48 hours after liftoff depending on the position of the space station at the time of launch. 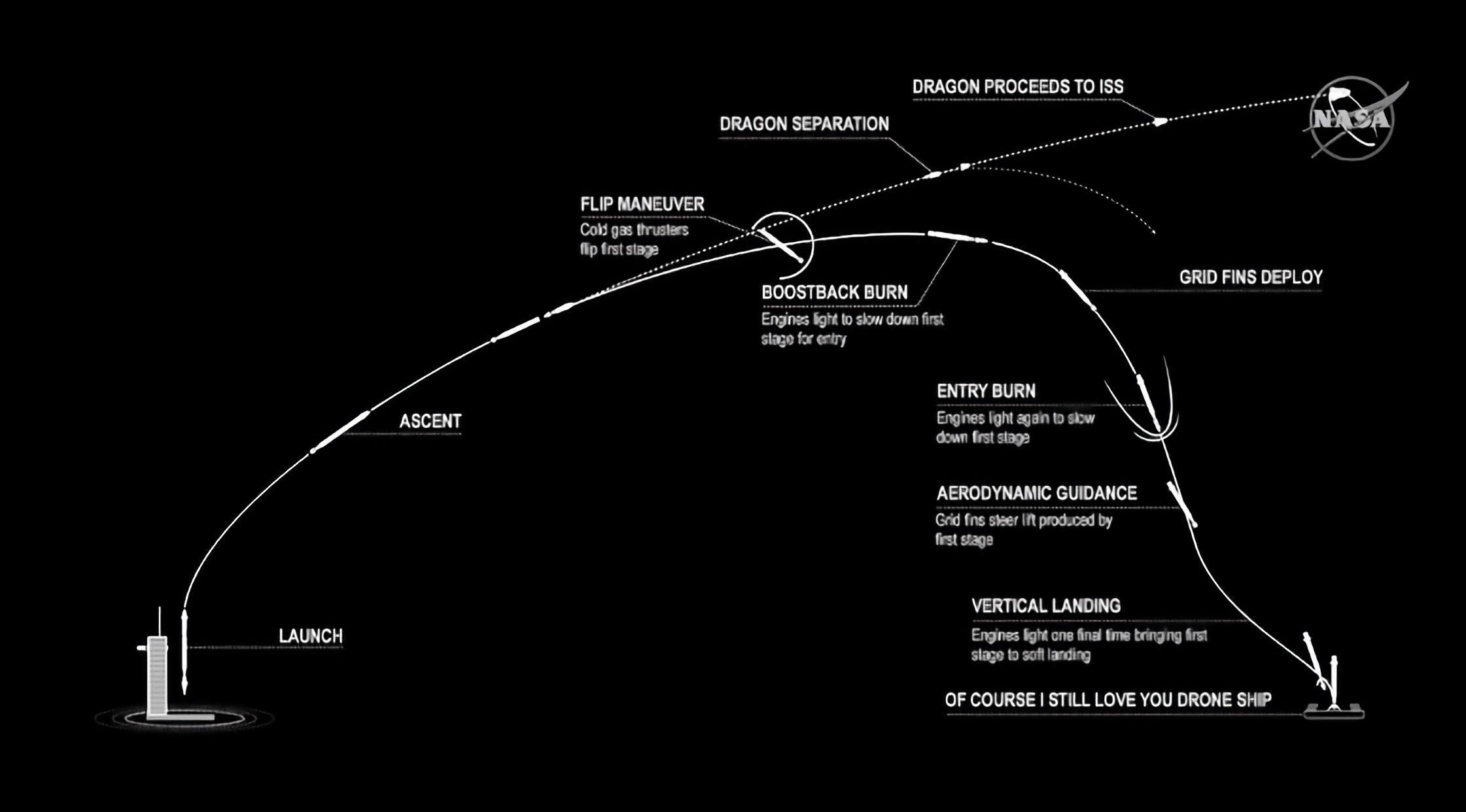 The exact launch time could vary greatly depending on weather, and there are a number of launch opportunities in late May through June in case there’s a need to scrub. Weather during this time in Florida can be a bit hard to accurately predict, as noted by SpaceX’s head of commercial crew, and the conditions necessary to trigger a scrub are less severe than they would be for a mission where there aren’t any humans on board, out of an abundance of caution.

Once the Crew Dragon is in space on its way to the ISS, however, the capsule will rendezvous with the station through a series of phased burns and then an approach, followed by an automated docking process once it reaches close proximity to the station. Crew Dragon has a fully automated docking process, and bypasses entirely even the need for astronauts on board the ISS to capture the spacecraft using the robotic Canadarm, which has been required for the older Dragon capsules and other astronaut-bearing Soyuz craft. 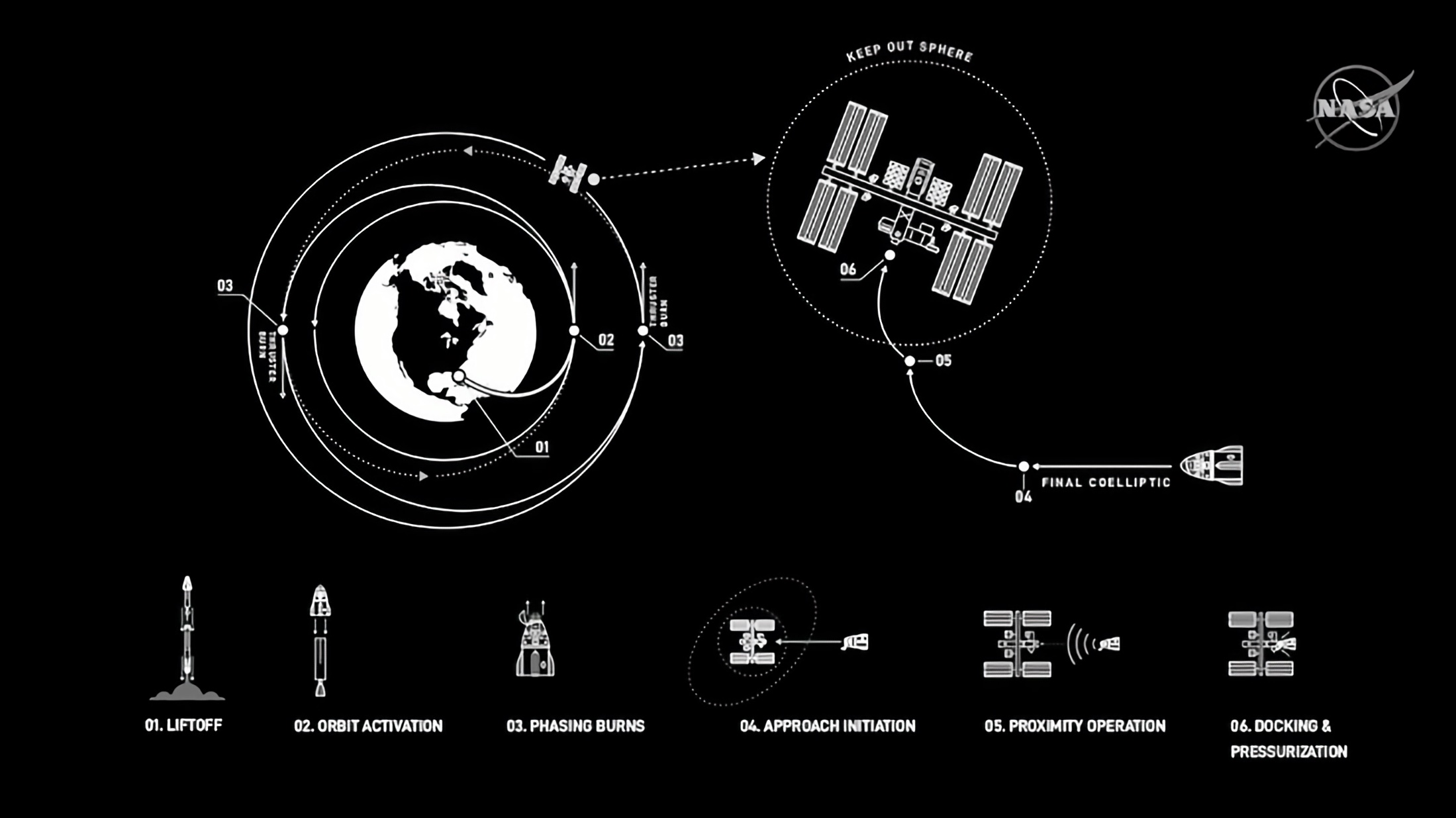 Once docked, Crew Dragon will pressurize and the hatch will open so the astronauts can board and carry on their mission with their colleagues on the station. On board the ISS, Benhken and Hurley will perform duties including conducting experiments and running maintenance on the orbital research platform, before they eventually depart by climbing back into Crew Dragon, undocking, jettisoning the “trunk” or cargo compartment of the capsule, performing a deorbit burn to get into reentry position and then deploying parachutes once in the Earth’s atmosphere to slow their final descent into the Atlantic Ocean. From departure to splashdown should take approximately 24 hours. 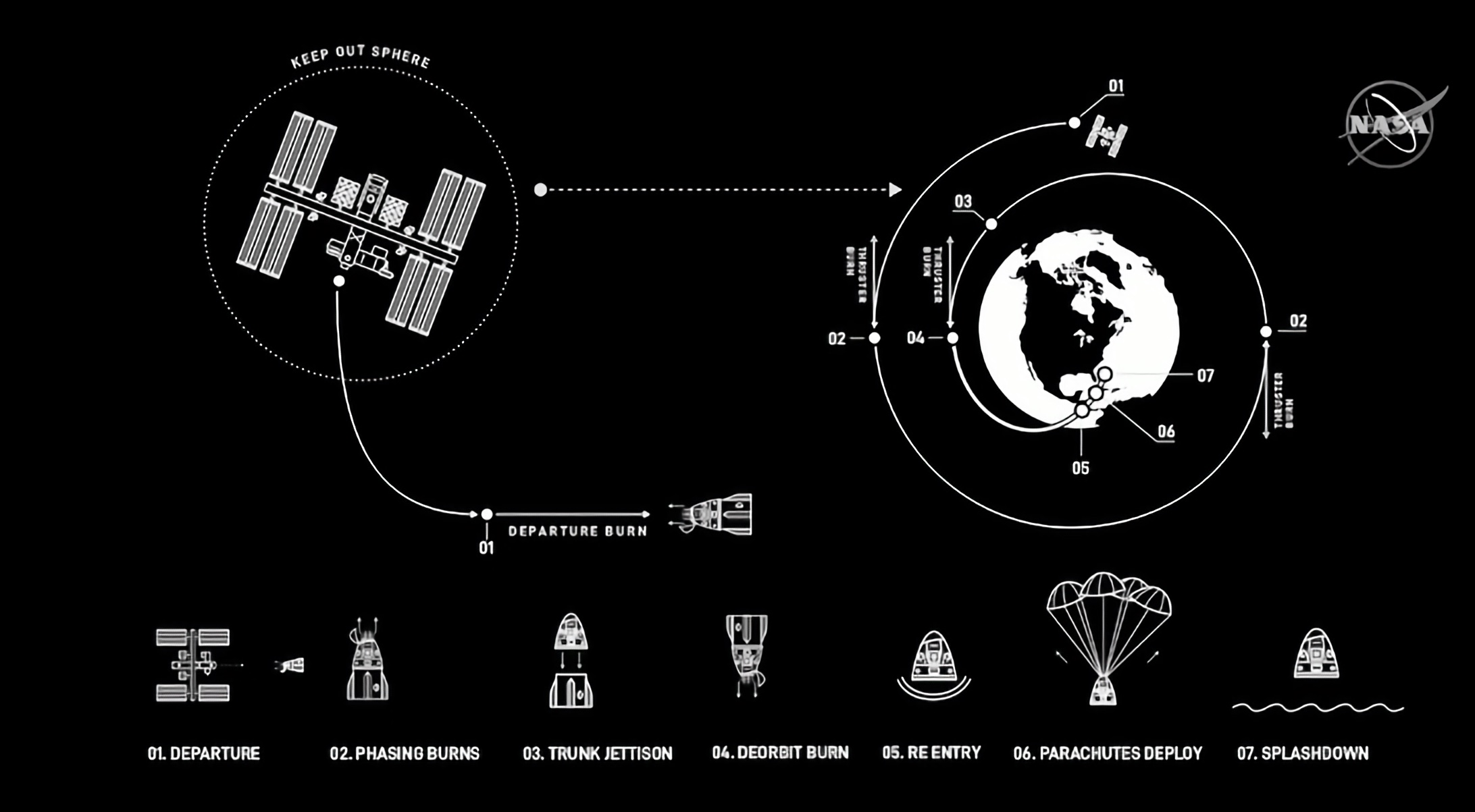 Other logistics details shared by the teams performing the mission include that the crew will enter a mandatory quarantine beginning on May 16 and lasting until the mission date, and that mission control crew who need to be on site for the launch will be observing a six-foot distancing rule because of COVID-19, and control stations have been arranged to make this possible.

The mission itself doesn’t sound all that complex when broken down step-by-step, but it represents the culmination of years of hard work on both SpaceX and NASA’s part. The U.S. has been without a homegrown ride to the ISS since 2011, and this is the closest yet we’ve gotten to a return to an era of regular human spaceflight from American soil, so it’s definitely going to be something you’ll want to watch live when the launch happens on May 27.