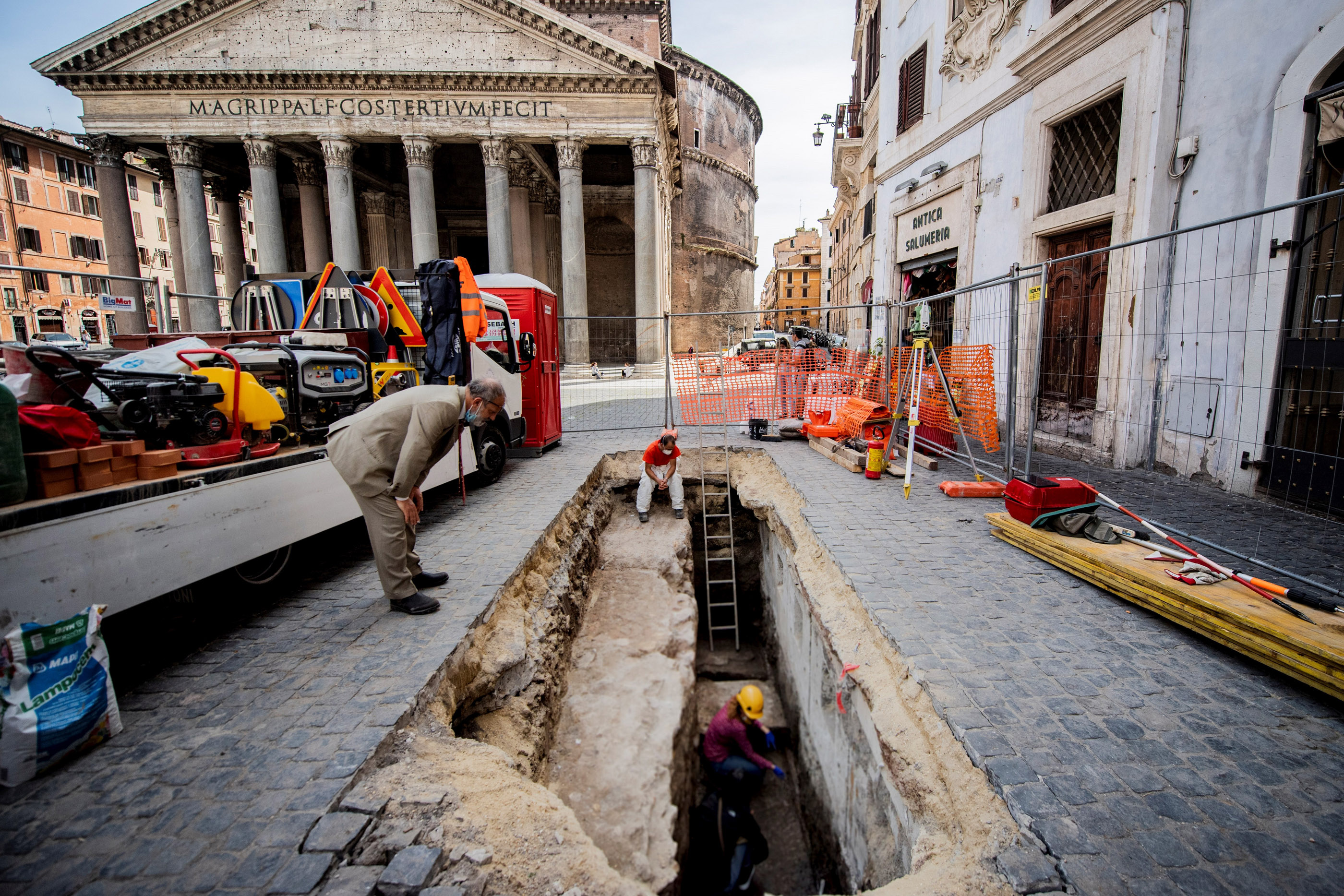 A sinkhole unexpectedly opened up in front of the Pantheon in Rome last month, revealing imperial paving stones that were laid over a millennia ago, news sources report.

The sinkhole, located in the Piazza della Rotonda, is almost 10 square feet (1 square meter) wide and just over 8 feet (2.5 m) deep. Inside the hole, archaeologists found seven ancient slabs made of travertine, a type of sedimentary rock.

Luckily, no one was hurt when the sinkhole collapsed on the afternoon of April 27, because the normally crowded piazza was empty due to the COVID-19 pandemic. Sinkholes like this one, however, are becoming an increasingly common problem in Rome.

The stones uncovered by the sinkhole were created around the same time that the Pantheon was built, from 27 B.C. to 25 B.C., according to Daniela Porro, Rome special superintendent. They were designed by Marcus Agrippa, a friend of Emperor Augustus, Porro told Italian news agency ANSA. However, the Pantheon and the piazza were completely rebuilt sometime between A.D. 118 and 128 by the emperor Hadrian, and the area was further modified at the beginning of the third century by the emperors Septimius Severus and Caracalla, according to Encyclopedia Britannica.

This find is actually a rediscovery: The slabs were first found in the 1990s, when service lines were being laid in the piazza, according to ANSA. The new sinkhole swallowed about 40 sanpietrini, or cobblestones, which fell into a service tunnel holding cables and pipelines, according to Roma Today.

Sinkholes, called “voragine” in Italian, are now fairly common in Rome. For most of the past 100 years or so, Rome typically experienced 30 voragini or other collapses every year; but that number began tripling starting in 2009, according to The Local, an Italian news outlet. For example, in 2018 the city counted a record-breaking 175 sinkholes, and 2019 brought 100 of these voragini, The Local reported. By comparison, Naples had 20 reported sinkholes in 2019.

What causes these sinkholes? Ancient human-made cavities, including those from quarrying, tunneling and constructing catacombs, have made the ground unstable, especially after heavy rainfall.

“The most sensitive area is eastern Rome, where materials were quarried in ancient times,” geologist Stefania Nisio, who is working on a project to map Rome’s sinkholes, told Adnkronos. “The main cause of a sinkhole in the city is the presence of an underground cavity.”

In addition, much of Rome sits on soft, sandy soil that is easily eroded by water and shaken by the vibrations of cars and scooters, The Local reported.

The city’s leaders announced a multi-million-euro plan to fix its streets in 2018, but progress has been slow, according to The Local. Until these upgrades are made, sinkholes may continue to reveal ancient architecture and artifacts, such as these paving stones.