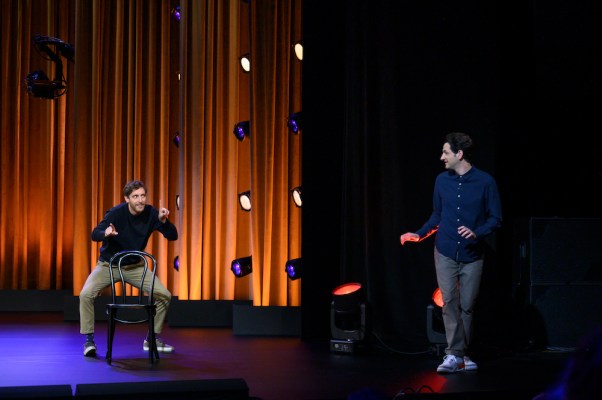 We’ll admit it: Some of your Original Content podcast hosts are a little skeptical about improvised comedy.

Of course, we can enjoy improv when it’s done well. It’s just that we’ve seen it done less well, often by friends who are so enthusiastic without being particularly funny. And our friends aside, live improv has rarely been translated successfully into an on-screen show or special.

So we had some reservations going into “Middleditch & Schwartz” on Netflix, which consists of three hourlong improv specials. But our doubts were quickly demolished as we watched the mind-bogglingly talented Thomas Middleditch (“Silicon Valley”) and Ben Schwartz (“Parks & Recreation”) spin up dizzyingly complex plots based on just a few prompts from the audience, bringing to life dozens of characters and tying everything together into a big comedic climax right as their time is runs out.

And sometimes, the show is even better when things don’t go smoothly — when they’re forced to backpedal out of a narrative dead end, or when they struggle to remember the names of the character they’re playing at a given moment, or the accent they should be using.

Before we get to our review, we also discuss our thoughts on the current battle between NBCUniversal and big movie theater chains, over the studio’s decision to release “Trolls World Tour” directly to video-on-demand and potentially to follow suit with other films.

You can listen to our review in the player below, subscribe using Apple Podcasts or find us in your podcast player of choice. If you like the show, please let us know by leaving a review on Apple. You can also send us feedback directly. (Or suggest shows and movies for us to review!)

And if you’d like to skip ahead, here’s how the episode breaksdown:
0:00 Intro
0:30 NBCUniversal news
18:00 “Middleditch and Schwartz” review