Facebook today revealed its plans to celebrate the 2020 graduates this week across both Facebook and Instagram. The series of events, starting today on May 11, will include the company’s previously announced plans to air a virtual graduation ceremony on May 15, featuring celebs like Oprah Winfrey, Awkwafina, Jennifer Garner, Lil Nas X, Simone Biles and Miley Cyrus, among others. Facebook will also now introduce a range of new graduation-themed products and programming across both Facebook and Instagram, including AR effects, chat filters, stickers, challenges, student spotlights and homages, contests, gift guides, collaborative films, and more.

The events serve a dual purpose. In addition to celebrating grads, Facebook aims to extend the time students, their families and friends spend on its apps, outside of the virtual graduation ceremony itself.

To that end, it programmed a week’s worth of online activities for graduates and others to participate in. 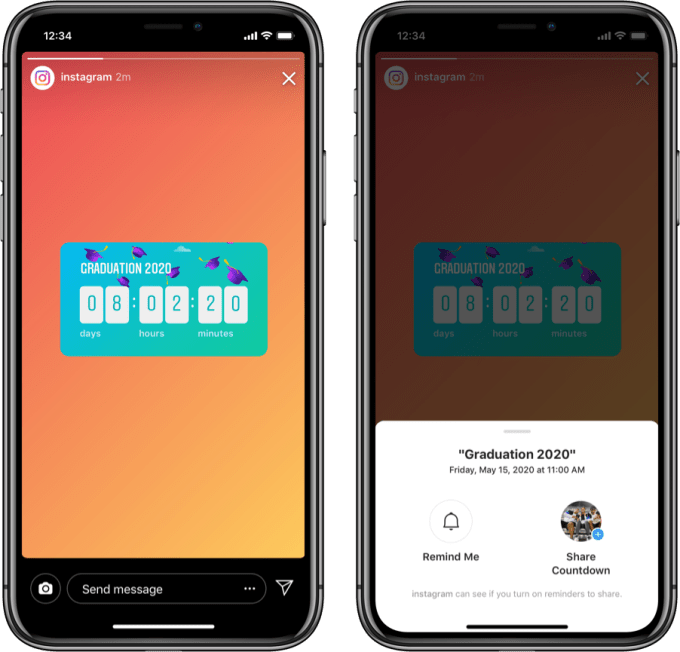 Starting today, May 11, Instagram will add a new graduation countdown sticker for Stories that will promote the May 15 graduation ceremony. Users can also re-share from the main @instagram Story and set a reminder for themselves about the event. Instagram is additionally introducing two new hashtag challenges, including a throwback #GradPhotoChallenge and #MySeniorQuote challenge to feature quotes from seniors across the U.S.

On Facebook, the company is beginning the “Student Spotlight” series that will celebrate this year’s outstanding grads.

Both platforms will also gain grad-themed AR effects. This includes Instagram’s AR graduation speech and cap filters with customizable tassels and Facebook grad cap and walk stickers on Stories. Facebook will offer profile frames, as well, in a variety of school colors. 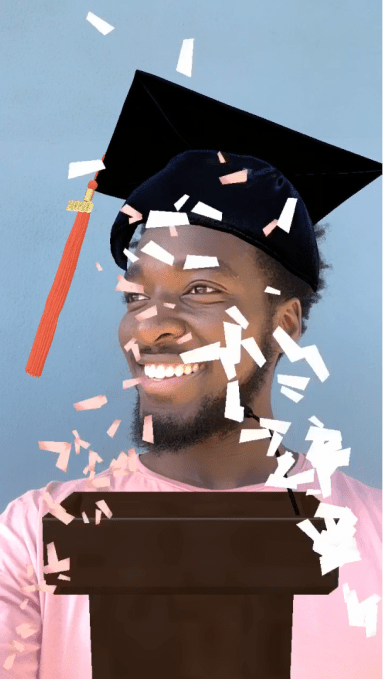 A grad-themed video chat filter will launch on Messenger, featuring a grad cap experience in a range of styles. College-themed grad cap and gown experiences will also launch in the Effects gallery in Instagram’s Stories. 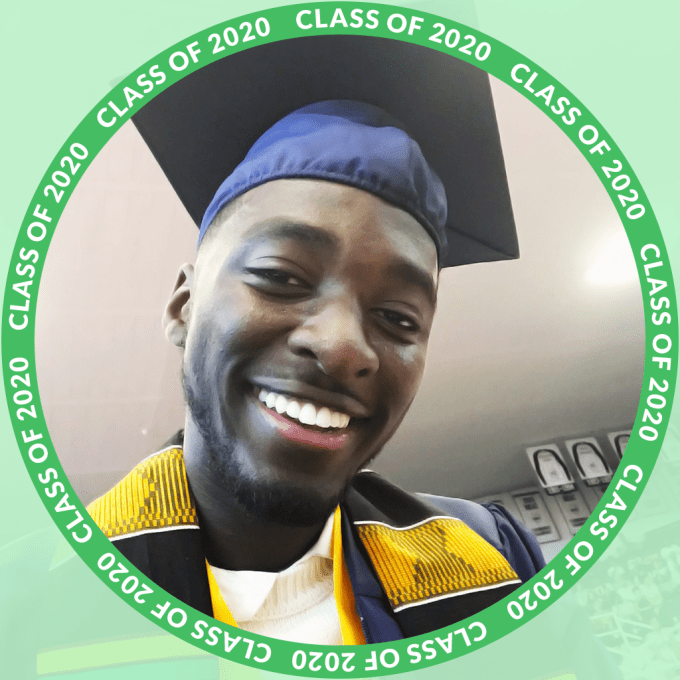 Facebook on Wednesday will being airing a feature film by Jenn Nkiru of Iconoclast, which gives voice to this year’s graduates as they share excerpts of Marina Keegan’s, “The Opposite of Loneliness” essay using imagery from their own school years.

Facebook will also on Wednesday began to share grad walks on its Facebook app Page’s Stories section, and encourage others to do the same using the hashtag #GradWalk2020.

Thursday, May 14, starts Superlative Day on Instagram, where featured creators will share some of the best superlative from students. Instagram will also be home to an art contest co-hosted by @brooklynmuseum and @design which is asking for student portraiture which will appear in a virtual “art show” on both accounts, with support from Instagram’s own @creators, as well. Five winners will be awarded $5K grants from Instagram.

The @creators account will additionally feature Bryce Xavier, Nia Sioux and Livvy Dunne and “yearbooks on Instagram,” starting on Thursday.

Meanwhile, Instagram’s @shop will open up a graduation gift guide featuring products from a number of small businesses that can be shopped right in the app. 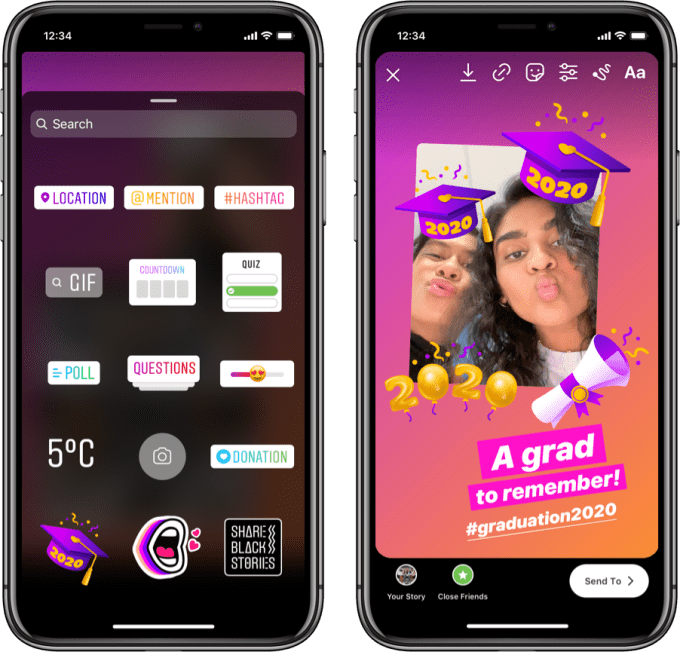 Friday, May 15, is the big day with the virtual ceremony, #Graduation2020, at 11 AM PT/2 PM ET via Facebook Watch within the Facebook app and on facebook.com/facebookapp. Highlights from the event will be posted to the @instagram account and on contributors’ own social media.

Facebook today announced new additions to the ceremony, which was already set to include an introduction by Sheryl Sandberg, an address by Oprah, and performance by Miley Cyrus (“The Climb.”)

It’s now adding Cardi B, DJ Khaled, La La Anthony, Kristen Bell, Selena Gomez, Sterling K. Brown, Matthew McConaughey, and Milo Ventimiglia to the event and has released a full list of other contributors who will join at some point during the broadcast.

Also on Friday, friends and family and other community members will be invited to share advice and well-wishes with the Class of 2020 as part of a “Dear Grads, Love Groups” initiative. These will be compiled into a film directed by Chris Wilcha and made available on the Facebook app after the commencement. Instagram’s @shop will then close the week of events with a Stories takeover from small business founders who will also share their advice with grads.

In the weeks following graduation, Facebook will begin allowing students, teachers, and alumni in the U.S. to offer and request assistance in their college communities in its Community Help feature. This will focus on categories like career help, housing, moral support, fitness, and supplies. 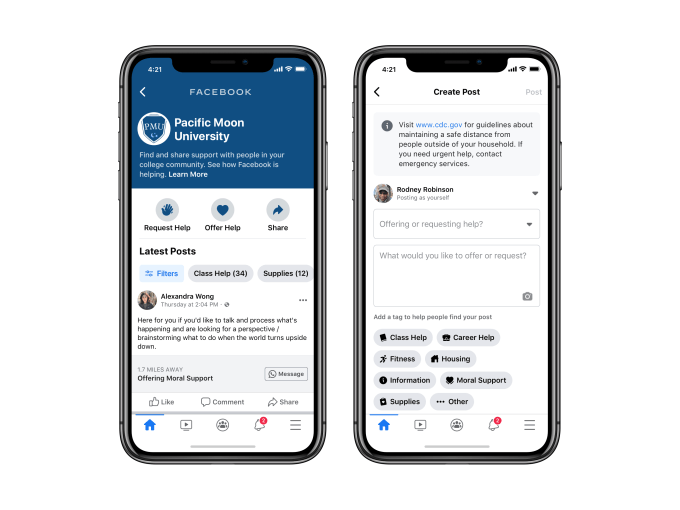 The week-long list of events is only one of several online graduation celebrations that students can join this week, as the COVID-19 pandemic has forced schools to cancel their planned in-person ceremonies due to the pandemic and forced lockdowns. While many schools are offering some sort of virtual experience for graduates, some students said these have been disappointing and report feeling sad, depressed and having missed the chance to celebrate an important milestone.

Along with Facebook, other online events include YouTube’s virtual gradation on June 6 featuring commencement addresses by former President Barack Obama and Michelle Obama, plus participation from BTS, Lady Gaga and former Secretary of State Condoleezza Rice. There are also a number of graduation-themed TikTok challenges, and individual schools are often promoting their own social media hashtags for their virtual celebrations.

But despite the star-studded nature of some of these virtual events, they may not address students’ feelings of loss. The pandemic has taken away many things, but students having to miss out on milestone events like prom and graduation are particularly difficult because they can’t be revisited at some later, “safer” date further down the road.