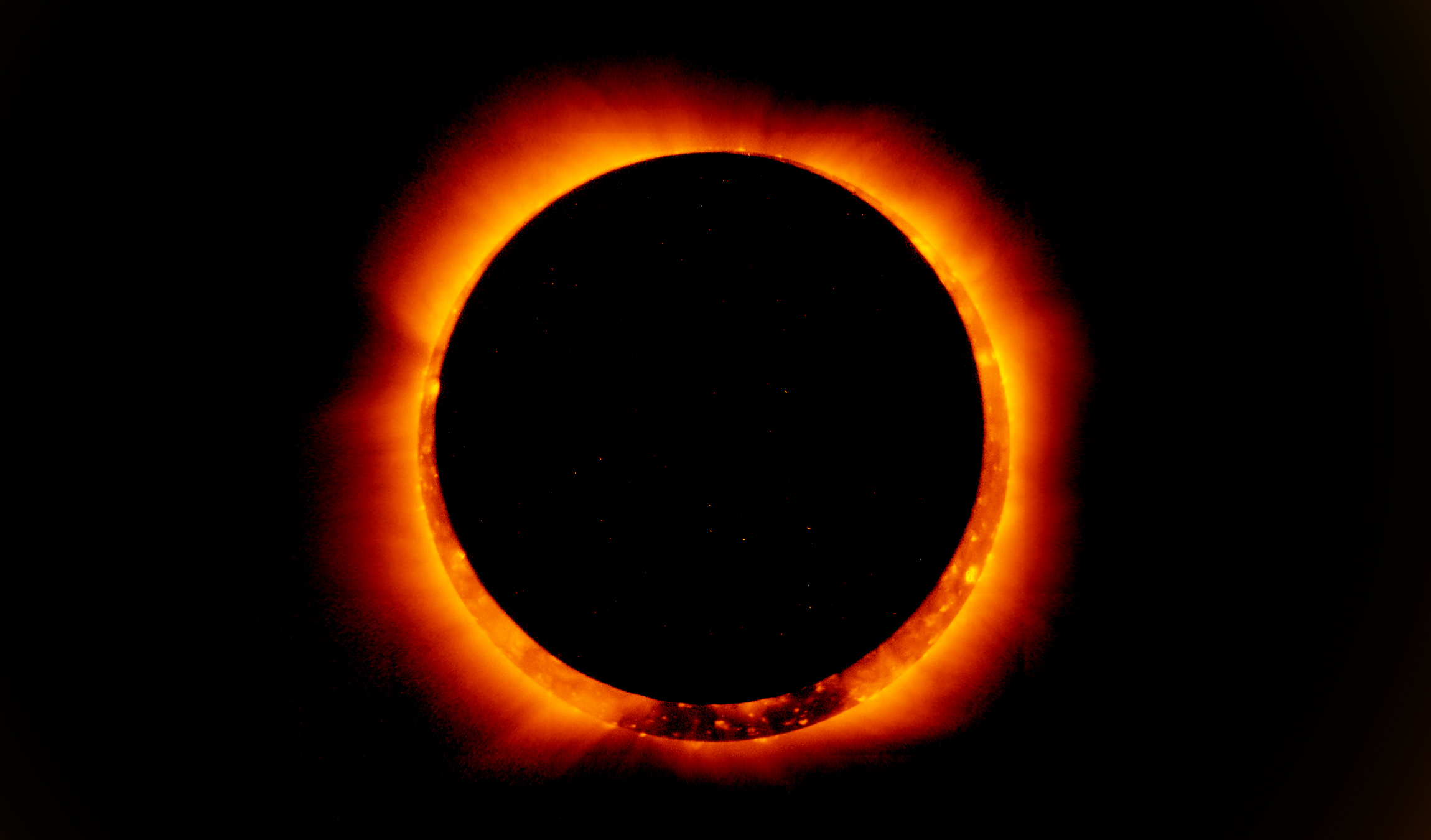 The summer solstice isn’t the only celestial event on the books this Sunday (June 21). An annular solar eclipse dubbed the “ring of fire” will also awe skygazers as the moon passes between Earth and the sun. And though conspiracy theorists would have you believe otherwise, the coinciding events do not portend a doomsday.

Unlike the Great American Solar Eclipse that took the U.S. by storm in 2017, however, this solar eclipse won’t be total. Instead, a fiery ring of the sun will still be visible around the moon. That’s why it’s called an annular solar eclipse (“anulus” means “ring” in Latin).

Nor will the eclipse be visible in North America; only viewers along a specific path in Africa, the Middle East and Asia will catch the event. And you won’t want to miss it; an annular solar eclipse that falls on the summer solstice won’t happen again until June 21, 2039.

To watch the eclipse, tune in online — the Virtual Telescope Project is showcasing its “solstice annular solar eclipse” livestream from several countries that are in the eclipse’s path. However, don’t worry that the solstice and eclipse duo is a sign that the apocalypse is nigh (more on this later), as there’s no evidence that the world will end on Sunday.

The summer solstice happens because Earth is tilted about 23.4 degrees toward the sun. On June 21 (although some years, the solstice happens on June 20 or 22), when Earth’s North Pole is tilted directly toward the sun, the Northern Hemisphere basks in more daylight than any other day of the year, according to timeanddate.com. (The summer solstice also coincides with Father’s Day in many countries.)

This year, the summer solstice happens at 5:43 p.m. EDT. At that time, the sun will point directly over the Tropic of Cancer and Earth’s tilt toward the sun will be at its maximum, Live Science previously reported.

Meanwhile, an annular solar eclipse can only happen when the moon is farthest from Earth, according to NASA. Due to this distance, when the moon passes between Earth and the sun, the moon isn’t able to block the entirety of the sun’s light. That’s why the moon will look as if it has a fiery ring around it.

People in Africa, southeast Europe, Asia and the Pacific will be able to see a partial eclipse, when the moon blocks a portion of the sun, according to Space.com, a Live Science sister site. However, the best views will be along the actual path of the eclipse, which begins in the Republic of Congo at 5:47 a.m. local time (12:47 a.m. EDT; 0447 GMT).

From there, the path of annularity (where the moon blocks out most of the sun) will travel through South Sudan, Ethiopia and Eritrea before moving over the Red Sea into the Arabian Peninsula, Space.com reported. After that, the annular solar eclipse will be visible in Pakistan, northern India and southern China before reaching Taiwan and then part of the Pacific Ocean.

Remember, just as you would never look directly at the sun, avoid looking at the solar eclipse, because it can damage your eyes. One young woman learned that the hard way after looking at the sun during the Great American Solar Eclipse. That woman was later diagnosed with solar retinopathy, a type of retinal injury that results from direct sungazing.

On a lighter note, one thing you shouldn’t worry about is the apocalypse. According to news reports, Christian evangelist Paul Begley, who has 335,000 subscribers on his YouTube channel, recently said that the solstice annular solar eclipse was a sign that the end of the world was near.

Begley pointed out that a number of the 10 biblical plagues from the Jewish holiday Passover were already sweeping the world, including “Locusts of a biblical proportion” in parts of Africa, the Middle East and Asia. The annular solar eclipse could be the plague of darkness, Begley said in his YouTube video. He didn’t, however, mention any of the other plagues, which include frogs, boils, lice and rivers turning to blood.

In addition, some conspiracy theorists have repurposed the supposed 2012 Mayan apocalypse. (In fact, the Maya did not even predict an apocalypse; they simply stopped updating their Long Count Calendar after 2012, which was the end of a major calendar cycle). But conspiracy theorists are undeterred by this fact, and are now saying the apocalypse will instead take place on June 21, 2020. The reason for the date change? The doomsday prophesiers say it’s because the former date relied on the Julian Calendar, rather than the Gregorian Calendar, the Daily Star reported.

Finally, other “tinfoil hat wearers” are saying that a mysterious planet known as Nibiru will crash into Earth on June 21, the Daily Star said. Rest assured, though: The Center for Near Earth Object Studies at NASA’s Jet Propulsion Laboratory in California hasn’t noted any doomed planets that are heading our way, at least not by Sunday.