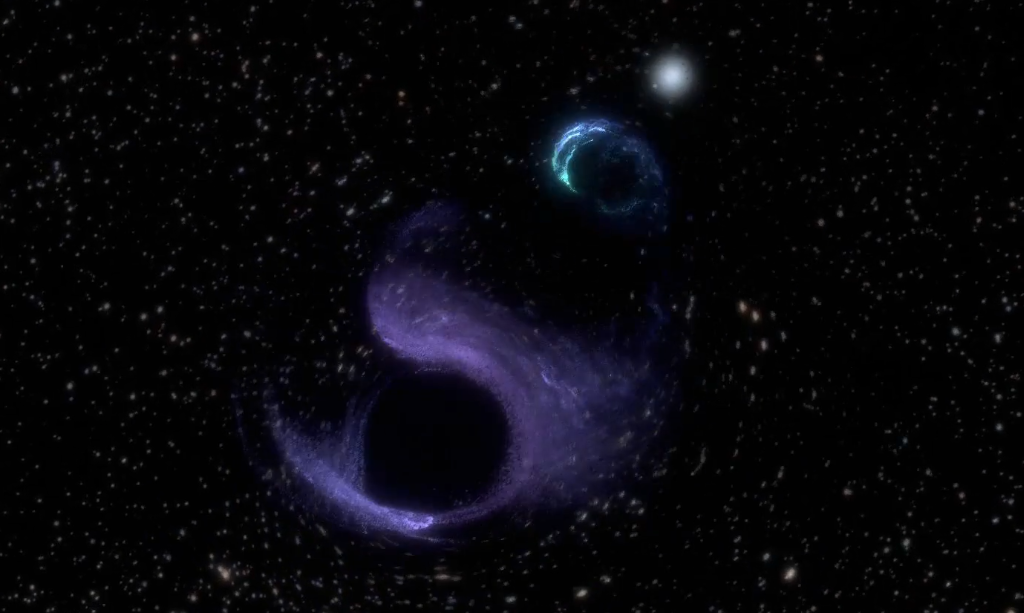 A signal from space first detected Aug. 14, 2019, may have come from a mystery object. And it might force physicists to rip up an old idea about black holes and neutron stars.

The signal was a gravitational wave, a ripple in space-time labeled GW190814, and seemed to indicate the collision of two wildly mismatched objects. The larger one was definitely a black hole, about 23 times the mass of our sun. And the smaller one was either a black hole or a neutron star, about 2.6 times the mass of our sun. There’s just one problem: There’s never been evidence that black holes or neutron stars of that size even existed.

Astronomers have never detected black holes lighter than five times the mass of the sun. And neutron stars seem to max out well below 2.5 solar masses. In between the two is a “mass gap” where, for uncertain reasons, no compact objects seemed to form. Until now.

(There have been occasional, tentative reports of objects in the mass gap before, but this gravitational wave seems to offer the most compelling evidence.)

In theory, black holes could be lighter than five suns. Any amount of mass, compressed tightly enough, can collapse into a singularity. Some theorists have even suggested the universe might be full of mini-black holes that we haven’t yet detected. But astronomers haven’t found any examples, and mainstream astrophysical models don’t include clear explanations for how such a tiny black hole could form.

Neutron stars are the densest known celestial objects, other than black holes. And like black holes, they’re left behind after older stars’ supernova explosions. But neutron stars seem to max out at a certain mass. The most massive known neutron star is 2.14 times the mass of the sun, and researchers assume they don’t get bigger than 2.5 solar masses. This object exceeds that, making it too large to fit neatly with other neutron stars that astronomers know about.

And the gravitational wave itself offered no clues as to whether the object was a neutron star or black hole, according to a statement from the Laser Interferometer Gravitational-Wave Observatory (LIGO) and Virgo, the two institutions that detected the wave.

If the smaller object was a neutron star, it might have emitted a pulse of light that telescopes — racing to watch the patch of sky where the gravitational wave originated — might have picked up. (In 2017, researchers spotted just such a flash of light when two neutron stars merged.) But in this case there was no flash.

That doesn’t mean the merger didn’t involve a neutron star though. This collision was much more distant than the 2017 merger, so any light coming from the collision would be fainter. It’s also possible the black hole gobbled up the smaller object too quickly to emit any light.

“I think of Pac-Man eating a little dot,” Vicky Kalogera, a Northwestern University astronomer and LIGO researcher, said in the statement. “When the masses are highly asymmetric, the smaller neutron star can be eaten in one bite.”

The asymmetry itself is a mystery. No merger with such a wide mass difference has ever been detected before. And it’s not clear how such a binary system would form.

“Explaining the formation of the detected binary system is hard. Its unique combination of mass ratio and masses challenges all current astrophysical models,” Mario Spera, a Virgo researcher also based at Northwestern University, said in the statement.

There are some preliminary ideas about what might be going on here, Spera said. Dense, active cores of hot galaxies might produce lopsided pairs of celestial objects. Newly-formed star clusters might do the same.

“However, what we know for sure and so far is that the universe is firmly telling us that we are still missing most of the story on the formation and evolution of compact objects,” he said.

A paper describing the mysterious collision was published June 23 in The Astrophysical Journal Letters.